Born on October 9th, 1955 in Neuchâtel (Switzerland), Louis Crelier opened up to music through classical piano and then through rock and pop music of the seventies, that he performed as keyboard player and singer. He started his professionnal career in 1975, composing some stage music and working as music preparator for contemporary music. He composes in 1977 his first symphonic piece Histoire which is right away performed in concert. The success of this first ambitious attempt brings him confidence in his possibilities. He entered then the world of entertainment in 1978 as resident composer at the Théâtre Populaire Romand (TPR). In these three years at the TPR with director Charles Joris, Louis Crelier has been dealing with some giants such as Shakespeare, Brecht, Arden, Maïakovski, Sophocles, Handke, and everything good to learn about stage world: working with actors, dramaturgy, scenography, touring, etc. Since then, he has composed over 30 scores for stage.

Since 1981, he has specialized in film score composition (cinema, television, documentary, shorts and commercials). From director Jean-Jacques Lagrange, first to trust him with Mérette, to Thomas Koerfer who opened for him the german market with Concert for Alice, until Denis Rabaglia in 2001 with Azzurro, Louis Crelier has worked extensively in Western Europe, having composed over 80 film scores including feature films, tv-movies and documentaries. In 1984, he was awarded the prestigious Vocation Award by the Baroness of Rothschild for his contribution to film score composition. In 1994, he received the 40th Anniversary Award of the Swiss Television for his song Couleur Noir et Blanc (Color Black and White). In 2001, the film Azzurro is awarded as "Best Film of the Year" at the Swiss Cinema Awards, and his music is nominated to the World Soundtrack Awards in the category "Best Song Written Directly for a Film" together with composers such as John Williams and Hans Zimmer. He is also nominated to the European Soundtrack Awards 2006 for his music to the film Pas de Panique (Do not Panic) directed by Denis Rabaglia.

Next to his composer activity, Louis Crelier has always been singing, first in the pop-rock field with the album and tour named 33 Detours in 1982, then also as a jazz-singer with Jazzsongs with his own quartet and with the famous Louisiana Dandies Jazz Orchestra lead by talented arranger René Hagmann (The Jazz Singer). In 1997, he sings the blues of the seventies with guitar players John Woolloff and Laurent Poget: the BluesBeggars (On the road again).

He is currently working on a new opera La Passion selon Marie (The Passion according to Mary) on a libretto by Valérie Letellier. His first opera La Citadelle de Verre (The Glass Citadel) has been produced in April 2018 by Opéra en Scène, as well as Sheherazade, trial of an infidel in 2020.

He is a member of the World Soundtrack Academy and of the European Film Academy. He is also Founder (and former Vice-Chairman) of FFACE (Federation of Film and Audio-Visual Composers of Europe) and of ECSA (European Composers and Songwriters Alliance). He is a Board member of the SSA (Swiss Author Society) 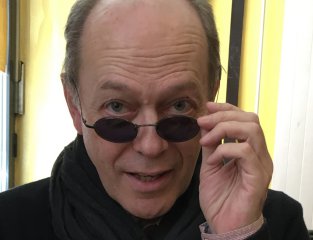